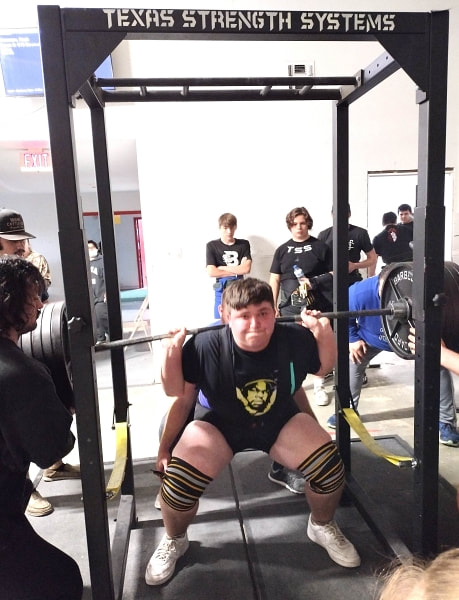 Bulldog Noah Sizemore had a 625 pound Squat to help him place second in the 308 pound class at the TSS meet last week.

Powerlifting
The PowerDawgs, Bandera’s powerlifting team, had another podium result last week, a bronze for the boys division, this time at the Texas Strength Systems meet held on Wednesday.
As this was the last chance to qualify for Regionals, it was a big field of entries including Bandera, Cole, East Central, Jourdanton, Navarro, Randolph, Southside and Wimberley.
The ‘Dawgs, led by Ethan Brown who garnered his third “Best Lightweight Lifter of the Meet” award this season, had numerous individual podium winners and some top tens to finish third as a team.
“We had some great lifts and we hope its enough to get us multiple regional qualifiers. I am very proud of the boy's efforts all season. A great foundation has been laid for future growth as we have a lot of young lifters who will come into their own next year,” coach Manny Martinez said.

Baseball
The Bulldogs went 1-1 at the SAISD tourney last week with Saturday's games getting canceled due to weather conditions.
Game 1 saw Bandera leading Harlandale, 2-1, but the Indians bats got hot in the fifth, scoring 4 runs to nab a 5-2 win.
Bandera had just three hits in the game with Barrett Waid, Zach Quesnot and Pat Cizek recording one hit each.
Cizek got the start for the Bulldogs and had 8 Ks and a single walk.
Game two saw the Bulldogs pummel the Sam Houston Hurricanes, 29-0 in three innings.
Bandera recorded 14 hits and Sam Houston committed 10 errors and gifted numerous walks to Bandera for the contest.
Waid went 3 for 4 at the plate with 2 RBI’s, Scott Perry went 2-4 and had 3 RBI’s, Riley Haley was 2-2 with 2 RBI’s and Cizek had 3 RBI’s while going 1-3.
Haley and Colton Trenkelbach combined forces on the mound for the no hitter.
With the weather cancelations Saturday, Bandera stands at 2-1 as they host Ingram Tuesday.

Golf
Bandera Bulldog Boys Golf had their best outing of the season so far, shooting a 325 team total in the Blanco Invitational golf tournament last Tuesday.
Jesse Cardenas led the way with a fine round of 76 with teammates Tristan Stoops and Trevor D’Spain just a few strokes off the pace with a pair of 80s. Bradin Carrales and Josh Staples shot 89 and 94 respectively. The 94 is a personal best for Staples.
The Bandera Prophet is grounded on the premise that relevant news delivery is ever-evolving. Founded by newspaper veterans, the Prophet delivers up-to-date information by writers and photographers who combined have 50-plus years of experience in the field and newsroom. Completely free to readers, the Prophet is published on multiple platforms, and shared within the online community. No paywalls and no paid subscriptions
make news, sports, feature stories and more immediately available with one click of a button or one swipe on a keypad.
All content copyright property of The Bandera Prophet