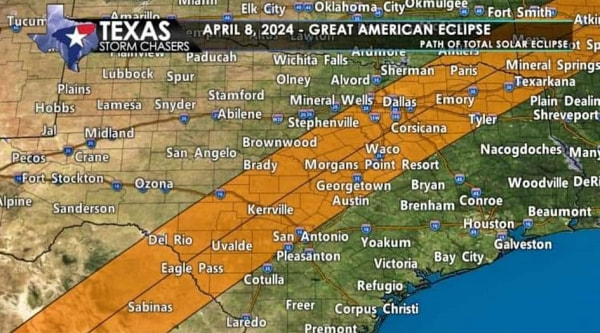 On Oct. 14, 2023, the sun will surround the moon, and both will align with Earth, creating a “ring of fire” - or annular eclipse. Not quite six months after that, on April 8, 2024, a total solar eclipse will carve a path across 13 U.S. states - and Bandera is the bullseye.
Anticipating an onslaught of skygazers, county officials are preparing now. Pct. 3 Commissioner Jack Moseley said Mansfield Park may be a command center during the eclipse event.
“The main issue will be traffic,” Moseley said, adding several ranches are gearing up to lease sections out, and the Lost Maples State Natural Area will be full for both the 2023 and 2024 events. “Many dude ranches are full. The people, they’re going to come. We can’t stop them.”
Moseley said the last bike rally blocked out 255 30x50 RV spaces in the front of Mansfield Park, and charged $55 per lot. That doesn’t include 60 RV lots in the back of the park, he said, for which the rally charged visitors $150 per day. The county charges a flat fee of $1,400 per day for use of the entire park.
Considering the possibility of renting out the park, Moseley said he might like to put it out for bid.
“A lot of people are going to try to bid it. We’re going to consider the best bids, not necessarily the highest,” Moseley said.
Throwing her hat in the ring, former Hill Country State Natural Area Ranger Leanne Beauxbeannies proposed a $5,600 bid for each event on a four-day lease. She said she was planning on about 200 spaces, had reserved porta-potties in advance, and carries insurance.
“I do expect to make some money, but I also expect to share it,” Beauxbeannies said, adding she intends to donate some of the proceeds to the Bandera Lions Club and the Bandera County Boys & Girls Club, whose staff will volunteer to help with parking and more.
“I have 10 years of experience as a park ranger…I’ve put on several events, including star parties. I have been in charge of music festivals,” Beauxbeannies said. “I know I cannot do it alone, but I’m surrounded by some pretty awesome people who will help me… Whatever I have to do, I’m here to say I will do it. I wouldn’t want to lose out to the highest bidder.”
Moseley said the cost to rent the entire park may increase, though it is undecided at this point by how much. County Attorney Janna Lindig said nothing precludes the court from adjusting the rental fee amount per event.
“Apparently what the bike rally is generating, we’re renting the park too cheap,” County Judge Richard Evans said. “We probably need to discuss that.”
During the 2024 total eclipse, the centerline will enter Texas as it crosses the Rio Grande River at the Mexico/U.S. border at about 12:10 p.m. Totality has been calculated to begin in Bandera at 1:31 p.m., with a duration of four minutes and 3.8 seconds - the longest in the country.
The last solar eclipse took place Aug. 21, 2017. This year, an annular solar eclipse will take place June 10.
The Bandera Prophet is grounded on the premise that relevant news delivery is ever-evolving. Founded by newspaper veterans, the Prophet delivers up-to-date information by writers and photographers who combined have 50-plus years of experience in the field and newsroom. Completely free to readers, the Prophet is published on multiple platforms, and shared within the online community. No paywalls and no paid subscriptions
make news, sports, feature stories and more immediately available with one click of a button or one swipe on a keypad.
All content copyright property of The Bandera Prophet