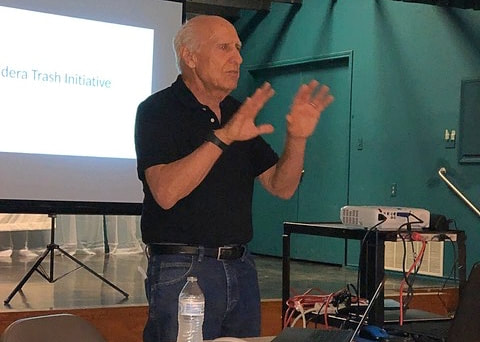 The meeting spearheaded by Bob Brischetto, coordinator of the annual Medina River Cleanup, called Let’s Talk Trash, addressing the issue of the trash and recycling problems in Bandera County, was held Friday evening in the Lakehills Community Center.
Thirty-four people attended, including two of our County Commissioners: Bobby Harris of Precinct 2 and Jody Rutherford of Precinct 4.
Brischetto spoke first and presented the agenda, which was 1) State Roads, 2) County Roads, 3) Yard Trash and 4) Recycling.
Brischetto introduced Mike Stiborik, a resident of Bridlegate, who presented a brief program on trash along the roadways in Bandera County. Stiborik said there are 52 groups in our county who voluntarily pick up trash on the state roads. There are 420 miles of state roads in the county and, so far, there are 215 adoptions. Each adoption covers two miles. The Texas Department of Transportation handles the state road adoptions throughout the state and that can be done online. Right now there are 22 segments of roadways available to adopt.
Anyone can volunteer to pick up trash on the county roads. All that is needed is for a group of people to get together and do it. For help with that, go online to Keep Texas Beautiful, at ktb.org.
Brischetto took the microphone again to discuss the problem of trash building up on private property, such as vacant lots and individual yards. The commissioners spoke of how they have tried to get those places cleaned up and how difficult it has been to get it accomplished. For that, they need equipment and funding. They agreed that, in certain individual cases, it was necessary to offer specialized help; such as with elderly and home bound persons. Harris pointed out that we have laws, which they have tried to enforce, such as the “nuisance and abatement act” and the prohibition against junk cars.
Finally, the recycling situation was addressed. There is no recycling in the county now. It is simply not economically feasible. All county trash dumps have the facilities but there are no people to sort recyclables and no one to work the balers. Before Covid, they used the jail inmates but now the sheriff will not allow that. For a time, recycled materials did not bring enough money. Now, however, aluminum cans, metal, and cardboard have value. But volunteers are needed to sort and bale.
Harris said he will take metals to be recycled. Harris and Rutherford suggested giving aluminum cans to CCPAL on FM 1283.
Brischetto handed out a sheet with a list of committees. He asked for anyone interested in any of the committees to sign up and there would be future meetings.
Brischetto also announced that the annual Medina River Cleanup is canceled this year, not because of Covid, but because parts of the river have dried up due to the drought.
For more information, contact any of the county commissioners. To help in any way, contact Bob Brischetto at 210-413-7264 or rrbrischetto@gmail.com.
The Bandera Prophet is grounded on the premise that relevant news delivery is ever-evolving. Founded by newspaper veterans, the Prophet delivers up-to-date information by writers and photographers who combined have 50-plus years of experience in the field and newsroom. Always free to readers, the Prophet is published on multiple platforms, and shared within the online community to more than 150,000 people. No paywalls and no paid subscriptions make news and feature stories immediately available with one click of a button or one swipe on a keypad.
​
All content copyright property of The Bandera Prophet