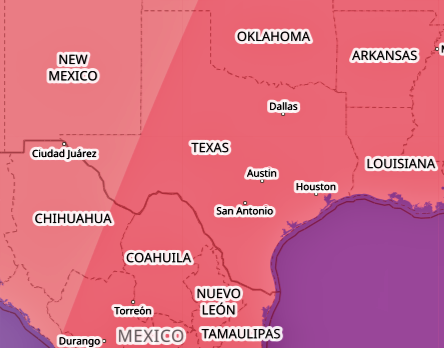 The dark red shading indicates the path of totality for the May 15 lunar eclipse.

The first of this year’s two lunar eclipses is set to take place in less than a week. In addition to being a full event, this one - the Super Blood Moon - is extra special.
The phenomenon occurs when the new moon passes into the Earth’s shadow, blocking all direct sunlight from its surface. Via the Earth’s atmosphere, some sunlight will still reach the lunar surface indirectly, allowing red wavelengths to filter through, creating the red glow.
According to timeanddate.com, “this is the longest prime-time total lunar eclipse on the west coast of the U.S. this century.”
Most of Texas is in the path of totality. The penumbral eclipse will begin at 8:32 p.m. on Sunday, May 15; partial eclipse will occur at 9:27 p.m.; the full eclipse will be at 10:29 p.m.; the maximum will take place at 11:11 p.m. (when the moon will appear red); and the full eclipse will end at 11:53 p.m.
The next total lunar eclipse will occur Nov. 7-8, and be visible from North America, Asia, North/Eastern Europe, Australia and much of South America.
The Bandera Prophet is grounded on the premise that relevant news delivery is ever-evolving. Founded by newspaper veterans, the Prophet delivers up-to-date information by writers and photographers who combined have 50-plus years of experience in the field and newsroom. Always free to readers, the Prophet is published on multiple platforms, and shared within the online community to more than 150,000 people. No paywalls and no paid subscriptions make news and feature stories immediately available with one click of a button or one swipe on a keypad.
​
All content copyright property of The Bandera Prophet