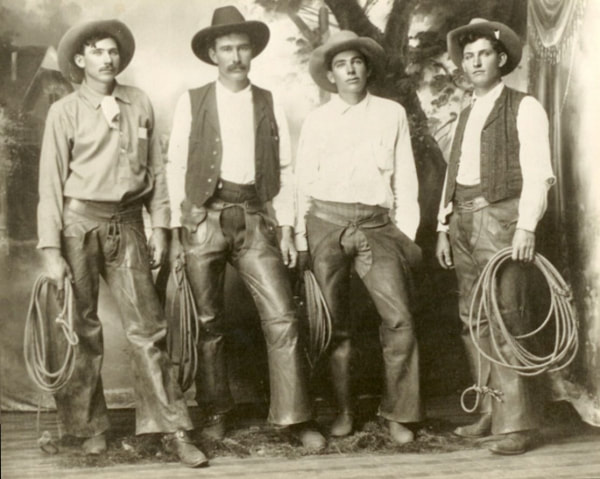 So you think you know what a real cowboy is? The cowboys of the silver screen were vastly different from the actual cowboys who worked on ranches and drove cattle up the famed cattle trails after the Civil War.
Hollywood presented an image of nattily dressed men with a holster and handguns riding high in the saddle saving a maiden in distress or fighting off bands of fierce Indians. But real cowboys led lives of hard work that could be tedious at times. They were generally low status workers who had little options such as former slaves, poor farm boys, Mexican vaqueros and even some Native Americans. They worked within a harsh, dangerous environment away from family and friends. Despite this, the cowboy became a representation of the American dream of independence, bravery and honor.
Exploring this contradiction between reality and myth, Rebecca Norton, the Executive Director of the Frontier Times Museum, will present a slide presentation, The Forgotten Cowboy – Hollywood Myths and Trail Driving Truths, Thursday, June 9, from 5:30 - 7:30 p.m., at the Bandera County Public Library.
Norton challenges preconceived notions of the cowboy through historical images of actual cowboys with those that were created not only in Hollywood movies but in the widely popular Buffalo Bill’s Wild West Shows that brought the cowboy myth to popular culture even while the cowboys were still driving cattle up the cattle trails. Norton will also explore how the cowboy ideal has influenced several aspects of American culture including interior design, fashion, music, and even politics.
The presentation is being done in partnership with the Bandera County Public Library and will be held in the library’s downstairs meeting room. Refreshments will be served and the event is free and open to the public. The Bandera County Library is located at 515 Main Street, Bandera.
The Bandera Prophet is grounded on the premise that relevant news delivery is ever-evolving. Founded by newspaper veterans, the Prophet delivers up-to-date information by writers and photographers who combined have 50-plus years of experience in the field and newsroom. Completely free to readers, the Prophet is published on multiple platforms, and shared within the online community. No paywalls and no paid subscriptions
make news, sports, feature stories and more immediately available with one click of a button or one swipe on a keypad.
All content copyright property of The Bandera Prophet