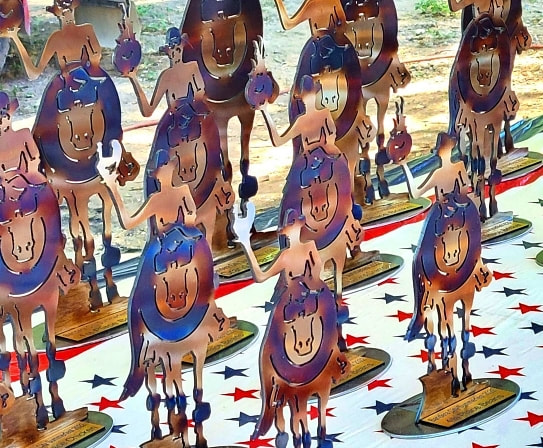 Bandera ISD
Summer Camps
Two camps are all that’s left until school starts with both starting in a few weeks.
Lady Bulldog Volleyball Camp will happen on July 16-18, from 9 a.m. to 11 a.m. T
The cost is $40 and is open to students K through 8th graders.
Football Camp will happen July 19-21 from 5-7 p.m. Cost of the camp will be $75 and it is open for K to incoming ninth graders.
Go to the BISD Athletics page, BISD Athletics: We Are One (google.com) for more information or to register for camps.

Football
With football season less than two months away, the Bulldog faithful can start planning for road trips and home games.
Looking to improve on last season’s 6-5 record (2-3 district), the varsity Bulldogs will have two scrimmages, six non-district games, an open date, then go right into district play for four contests this season.
The first of two scrimmages will be a three way affair on August 12 at home with Ingram and Natalia and then Bandera will take on Comfort there on Aug. 19.
The regular season schedule is as follows:
Non-district play
Aug. 26  Poteet Home
Sept. 2   Cotulla Away
Sept. 9   S.A. Kennedy Away
Sept. 16 S.A. Cole Home
Sept. 23 Hondo Home
Sept. 30 Robstown Away (Jourdanton)
Oct. 7     Open
District
Oct. 14  Pearsall Home
Oct. 21  Devine Away
Oct. 28  YMLA Home
Nov. 4   Carrizo Springs Away

With Crystal City and Hondo falling to 3A-D1 status, District 14-4A, is now one of five districts in 4A-D2 that have five or less schools in a district, so district wins will be even more important to make the playoffs.
Let’s go, Bulldogs!

Bandera Summerfest BBQ
The Lone Star BBQ Society (LSBS) cookoff held this past Saturday at Bandera City Park saw Russell Bohacek take the title of Grand Champion and Holden Hernandez named Reserve Grand Champion.
Bohacek had a good run in the points paying categories with a second in Brisket a fourth in Ribs and third in Chicken to score 24 points,
Hernandez had a ninth place Brisket, took first in Ribs and a fourth in Chicken to finish with 19 points.
Other winners were, Don Ramirez in Brisket (fifth overall), and James Bowen in Chicken (tenth overall).
In the non-points categories, Kyle McCormack won Beans, Todd Braendle had the best Bloody Mary, Rhett Butler had the number one and three Margaritas and Misti Dietrich won Salsa.

LSBS Bandera Summerfest Cookoff
Top 10 (place, entrant, points)
1, R. Bohacek, 24, H. Hernandez, 19, 3, Will Gerdes, 17, 4, Robbie Van Zandt, 16, 5, D. Ramirez, 14, 6, Darrell Drews, 12, 7, Richard Cruz, 11, 8, Jason Schneider, 10 (placed sixth in Brisket tiebreaker), 9, Dustin Blackwell, 10 (placed ninth in Brisket), 10, J. Bowen, 10 (did not place in Brisket)
The Bandera Prophet is grounded on the premise that relevant news delivery is ever-evolving. Founded by newspaper veterans, the Prophet delivers up-to-date information by writers and photographers who combined have 50-plus years of experience in the field and newsroom. Completely free to readers, the Prophet is published on multiple platforms, and shared within the online community. No paywalls and no paid subscriptions
make news, sports, feature stories and more immediately available with one click of a button or one swipe on a keypad.
All content copyright property of The Bandera Prophet