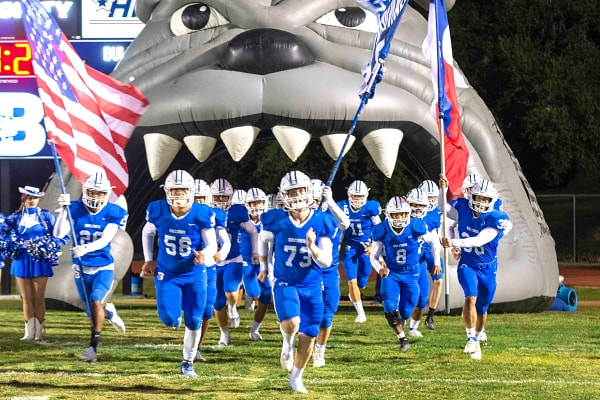 Bandera was the most improved defensive 4A team in Texas last season.

Bandera ISD
Summer Camps
Next week, the last two Bandera ISD summer camps will begin.
Lady Bulldog Volleyball Camp will happen on July 18-20, from 9-11 a.m.
The cost is $40 and is open to students K through 8th graders.
Football Camp will happen July 19-21 from 5-7 p.m. Cost of the camp is $75 and it is open for K to incoming ninth graders.
Coaches are close to 100 plus campers this year.
To register or for more information, go to the BISD Athletics page, BISD Athletics: We Are One (google.com).

High School Football
It’s been said that “defense wins championships” on more than one occasion and that would seem to be the case in Texas high school football.
Greg Tepper from Dave Campbell’s Texas Football recently ran an article about the Top 25 most improved varsity defenses in the state for the 2021 season from 1A to 6A.
It turns out that 11 of the 12 state championship teams were in the top ten in their respective classifications, but that leaves a lot of teams that didn’t make it to the finals or even the playoffs but improved defensively.
The most improved 4A school in the state and number five overall was Bandera. Yes our Bulldogs!
Bandera had a rough 2020, going 0-9 while allowing 45.0 points against per game. In 2021, the 6-5 Bulldogs only allowed 21.0 points against per game, a 24.0 papg improvement.
Two of Bandera’s regular opponents, 5-5 San Antonio Cole, the most improved 3A school (21.3 papg improvement) and 10-1 Carrizo Springs (20.0 papg improvement) were also in the top 25 at 9th and 14th respectively.
Bandera will take on Cole on Sept. 16 at home and Carrizo away on Nov. 4 in the final regular season game.
So, who was the most improved team in Texas?
Lingleville, a 1A school near Stephenville, had the biggest turnaround in Texas in a 6-3 season. The Cardinals had given up 64.9 points per game in 2020 but allowed just 31.6 points against per game in 2021, a 33.3 papg improvement. Not bad for a six-man team where offense usually rules the roost.
Interestingly, 16 of the 25 teams on the list had a winning record for 2021 with one team breaking even at 5-5, leaving eight teams on the list that finished 2021 with a losing record.
The Bandera Prophet is grounded on the premise that relevant news delivery is ever-evolving. Founded by newspaper veterans, the Prophet delivers up-to-date information by writers and photographers who combined have 50-plus years of experience in the field and newsroom. Completely free to readers, the Prophet is published on multiple platforms, and shared within the online community. No paywalls and no paid subscriptions
make news, sports, feature stories and more immediately available with one click of a button or one swipe on a keypad.
All content copyright property of The Bandera Prophet