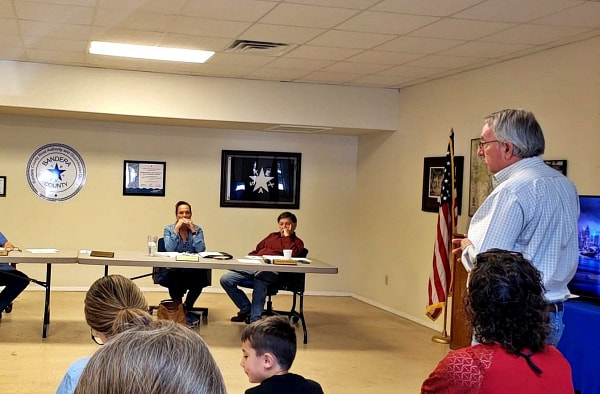 Johnny Boyle speaks to the Bandera County River Authority and Groundwater District board of directors.

Effective Sept. 1, a minimum of 10 acres will be required to drill new domestic wells, doubling the current acreage standard. The change was unanimously approved by the Bandera County River Authority and Groundwater District board of directors on Thursday.
Standing room only was left during the board’s July 14 quarterly meeting, which was lead with public comments from members of the community who are concerned about new subdivisions coming into the county.
According to Chapter 36, section 3.2, any well drilled on a tract under 10 acres will require a permit, and the owner will be mandated to submit an annual report with monthly usage information. The wells will be monitored by and subject to BCRAGD drought restriction protocols.
The new rule states:
“3.2 (c) For a new well located on a tract of land, in Bandera County, platted on or after September 1, 2022;
(1) The tract of land shall be 10 acres or more,
(2) Used solely for domestic use or for providing water for livestock or poultry,
(3) Drilled, completed, or equipped so that it is incapable of producing more than 25,000 gallons of groundwater a day,
(4) The tract of land shall not have an existing working well,
(5) For multiple water wells on the same tract of land over 10 acres there shall be a minimum of 10 acres per well to help ensure the wells will still be considered as exempt /registered wells…”
In his report, BCRAGD General Manager Dave Mauk said the water levels in the Middle and Lower Trinity aquifers, from which water comes in Bandera County, are down between five and 45.8 feet. Both aquifers, filled with ancient water thousands of years old, recharge slowly and inconsistently.
“When it rains, it takes a lot to get into the Middle Trinity,” Mauk said, adding long-term, the Lower Trinity numbers “look pretty scary.”
Mauk said wells are going dry in the area right now, especially around the Polly Peak area and the Eastern end of the county at Timbercreek.
The Medina Lake level today is 996.98 feet, or 11.8 percent. The lowest level recorded is 3 percent. According to Director Rachel Mulherin, the water was being pumped into the canals as of July 13.
“We’re in exceptional drought, and there’s nothing past exceptional drought,” Mauk said, issuing a warning to anyone thinking about going for a swim in the river.
“Don’t get in,” he said, adding the water temperature last week was 90 degrees. “When you get 90-degree water in a river that’s not moving, that’s a problem.”
The Bandera Prophet is grounded on the premise that relevant news delivery is ever-evolving. Founded by newspaper veterans, the Prophet delivers up-to-date information by writers and photographers who combined have 50-plus years of experience in the field and newsroom. Completely free to readers, the Prophet is published on multiple platforms, and shared within the online community. No paywalls and no paid subscriptions
make news, sports, feature stories and more immediately available with one click of a button or one swipe on a keypad.
All content copyright property of The Bandera Prophet