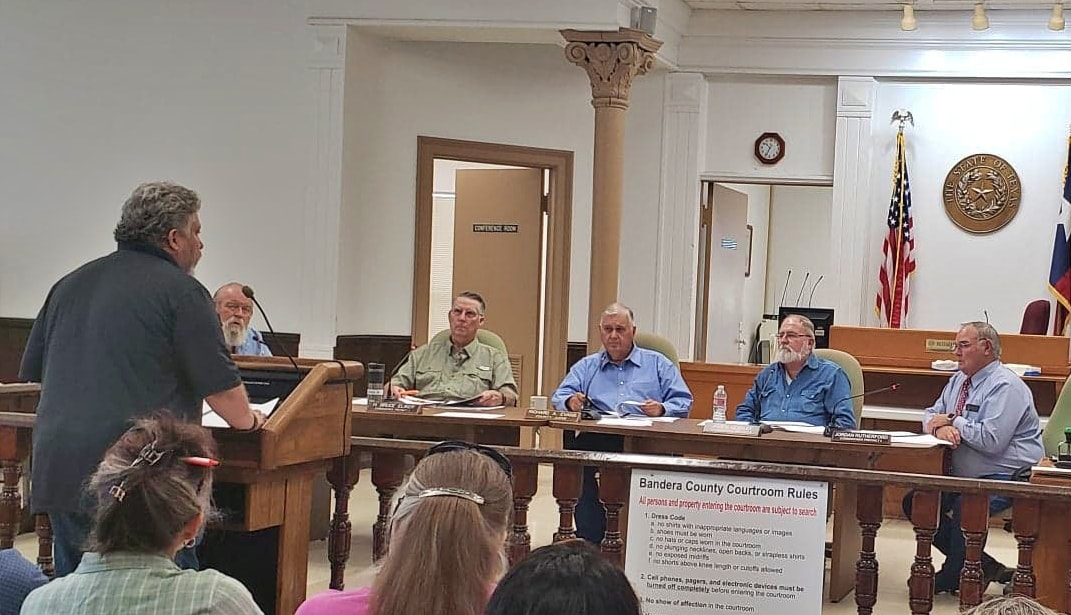 By Jessica Nohealapa'ahi
​The Bandera Prophet

County commissioners are considering increasing the minimum acreage required for drilling new domestic wells, as well as the lot sizes for public water supplies in new subdivisions. The conversation picked up momentum after the Bandera County River Authority and Groundwater District doubled the acreage standard from five to 10, effective Sept. 1.
BCRAGD Executive Director David Mauk spoke with commissioners last Thursday, clarifying the board’s July 14 action.
“You all know we changed our minimum lot requirements,” Mauk said. “We probably should have been at 10 acres all along.”
The new rule will not affect lots already platted in planned subdivisions, or wells already drilled - those will be grandfathered. Any new well drilled on a tract less than 10 acres will require a permit, and the owner will be mandated to submit an annual report with monthly usage information. The wells will be monitored by and subject to BCRAGD drought restriction protocols.
“It’s getting drier here, at least temporarily,” Mauk said, adding Bandera County is in a perpetual state of drought. “To me, this is not drought. This is a new reality.”
Mauk said new subdivisions with proposed public water supplies need to submit water availability studies, and must be approved by BCRAGD and TCEQ (the Texas Commission on Environmental Quality). However once the lots are platted, Mauk said, the groundwater district has no authority.
“We’re not through having droughts. In the last 16 years, I have closed the County Park twice. It’s been bone dry for seven weeks now,” Pct. 2 Commissioner Bobby Harris said. “I’m in favor of the 10-acre tract. I think we’ve got to adjust our subdivision rules, and take it a step further to address public water supply.”
County Judge Richard Evans asked Mauk for an official letter from BCRAGD that recommends changing the lot size, specifying the recommendation needs to be based on science.
“We have to be able to defend our position,” Evans said.
Mauk said Kerr County increased its minimum required lot sizes from five to seven acres in Centerpoint. Pct. 3 Commissioner Jack Moseley asked if 10 acres was enough.
“I think 10 acres is probably where we should stay,” Mauk said. “I don’t know if we can go higher, but that’s something we’re talking about.”
Pct. 4 Commissioner Jordan Rutherford said he was seeing wells going dry on the West End of the county. Mauk said the same thing was happening in the Polly Peak area.
“This is going to be scary for a little while,” Mauk said, recommending anybody with a well install a pump protector.
Several people spoke in favor of restricting subdivision development during the public forum.
Rebeca Gibson, who sits on the Board of Directors of the Hill Country Alliance, BCRAGD and is a member of the Bandera County Interagency Coalition, asked commissioners to use the court’s statutory authority to restrict subdivisions.
“We all see the effects of the drought,” Gibson said. “We see residents in dire situations.”
Other people echoed her sentiment, encouraging the court to increase minimum acreage requirements, and also requesting developers to adopt xeriscaping with native plants and grasses, which they said would minimize water usage toward landscape maintenance.
“We ask the county to exercise due diligence to make sure everyone has water,” Margo Griffin, of Friends of Hondo Canyon, said. “We welcome new neighbors, but we do not welcome concerns about water availability.”
Ben Eldridge, speaking on behalf of the Hill Country Alliance, asked when the 10-1 (acreage to well density) rule would become futile.
“Water, as we all know, is a limited natural resource that we all need to survive. We are in an area prone to severe drought,” Eldridge said, adding there were no tools to reverse course. “We really need to reflect on what is the responsible thing to do. We need to make sure whatever we do, we’re not acting too late.”
The Bandera Prophet is grounded on the premise that relevant news delivery is ever-evolving. Founded by newspaper veterans, the Prophet delivers up-to-date information by writers and photographers who combined have 50-plus years of experience in the field and newsroom. Always free to readers, the Prophet is published on multiple platforms, and shared within the online community to more than 150,000 people. No paywalls and no paid subscriptions make news and feature stories immediately available with one click of a button or one swipe on a keypad.
​
All content copyright property of The Bandera Prophet