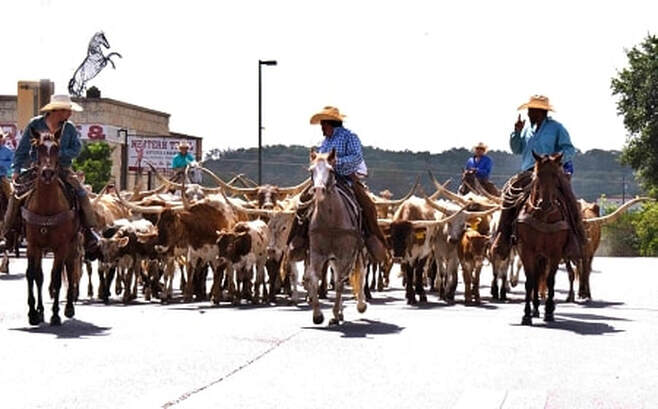 The longhorns make their way down Main Street during the 2021 Labor Day parade.

Bandera City Council members unanimously approved the employment contract for a new city administrator, who will begin Sept. 1. During their regular meeting on Tuesday, council voted to hire William Cox, of Mico.
Cox’s contracted salary is $100,000 per year, plus $3,600 per year for a car allowance. The salaries for previous administrators David Jordan and J. Horry were $76,000 ($84,000 with waived medical benefits) and $60,000, respectively.
In other business, council motioned to temporarily suspend entry fees for the City Park.
“The river is not flowing. We all know. I’m not suggesting we close the park, but I am suggesting we stop charging,” Mayor Suzanne Schauman said, adding the park revenue has dropped from $3,100 to $20 over the last four weeks.
Typically, admission is charged for entry to the park through Labor Day weekend. Council Member Toni Kunz said the fees supplement trash pick-up and park maintenance.
“If we don’t charge, people will go in. Who’s picking up after them?” Kunz said.
City Secretary Jill Shelton said three to four weeks remain until Labor Day and attendance is already down. She suggested the city monitor the river and if the water level rises before the holiday weekend, the park could be staffed then.
Council Member Jerry Russe said people have expressed concerns about those who continue to swim in the river, despite posted hazard signs.
“Historically, whenever the signs are up, people ask if they mean they can’t swim,” City Marshal Will Dietrich said. “They will jump in the water, they will let their kids swim in the water, but they will keep their dogs out of the water.”

~ Council members unanimously approved allocating $3,500 of Hotel Occupancy Tax funds toward the Longhorns on Main during the Labor Day Parade.
“It promotes tourism. It promotes overnight guests. It’s a unique activity that sets Bandera apart. It’s historical,” Bandera ProRodeo Association President Janna Lindig said, who dated the longhorns’ trek down a muddy, unpaved Main Street back to 1929.
Lindig said the Economic Development Corporation gave BPRA $4,000 toward the event, and the city’s dedication will cover the rest of the $7,500 bill.

~ Council members unanimously approved a motion to share the cost of repairing the 11th Street parking lot it leases from the Bandera United Methodist Church. The total bid by CLS Sealcoating & Striping, of Bandera, is $8,950, which will be evenly split between the city and the church.
Kunz said instead of spending money on repairs that would last one or two years, she preferred to pay for work that would last 15 years, and renew the lease with the church at the same time - which expires in 2023.
“Since we are so close to the end of the lease…I would rather put the citizens’ money to something that will last longer,” Kunz said. “I think it would be better for all parties involved to spend the money more wisely.”
Church representative Don Giles said the immediate work needed is the penalty for not maintaining the parking lot over the last 19 years.
“We’re culpable too…we need to take action now. We’re going to be looking at dirt in a few months if we don’t,” Giles said, adding the lease negotiation is a separate matter to be discussed later. “We’re not going forward with this. We’re paying back.”
The Bandera Prophet is grounded on the premise that relevant news delivery is ever-evolving. Founded by newspaper veterans, the Prophet delivers up-to-date information by writers and photographers who combined have 50-plus years of experience in the field and newsroom. Always free to readers, the Prophet is published on multiple platforms, and shared within the online community to more than 150,000 people. No paywalls and no paid subscriptions make news and feature stories immediately available with one click of a button or one swipe on a keypad.
​
All content copyright property of The Bandera Prophet