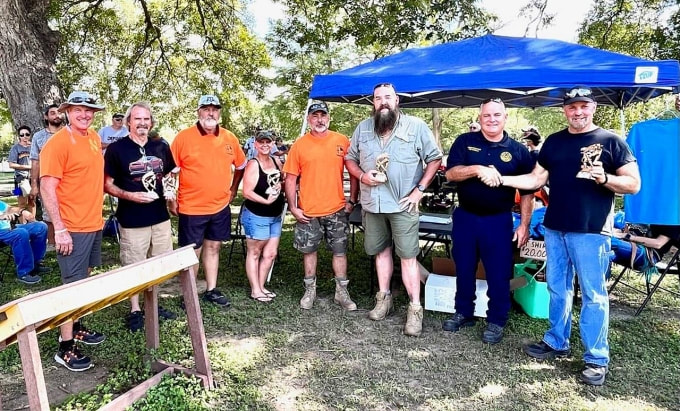 The Bandera Fire and Rescue Fireman's Challenge Carshow had 49 entrants this year in Bandera City Park Saturday, up from 32 entries for the previous show.
Participants were vying for one of the four coveted department officers pick of show trophies and/or a Top Twenty award.
Pictured are the officers of the department and the corresponding trophy winner.
Max Konz presented the Fire Chiefs award to Glenn Allen and his 1932 Ford Coupe.
Assistant Chief Brian Gillaspy picked Kelley VonWeston and her 1983 Chevy C 10.
The President's award was given by Jeff Jilson to Darrell Young and his AM General HumVee.
Fire Marshal Jason Rutherford gave his award to Brian Beaton and his immaculate 1955 Chevy.
The Bandera Prophet is grounded on the premise that relevant news delivery is ever-evolving. Founded by newspaper veterans, the Prophet delivers up-to-date information by writers and photographers who combined have 50-plus years of experience in the field and newsroom. Completely free to readers, the Prophet is published on multiple platforms, and shared within the online community. No paywalls and no paid subscriptions
make news, sports, feature stories and more immediately available with one click of a button or one swipe on a keypad.
All content copyright property of The Bandera Prophet