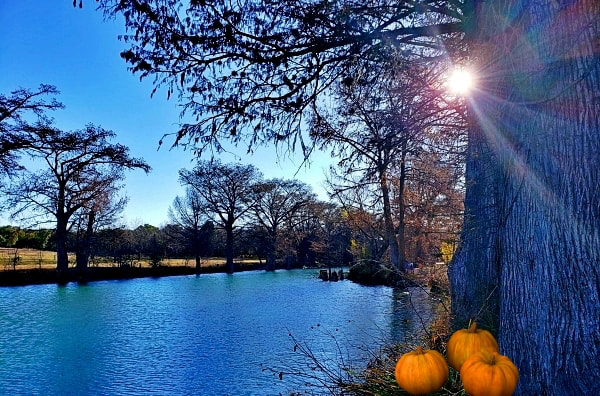 One of the nice things about being a kid around Bandera back in the day if you went swimming in the Medina River late in the evening you could skip taking a bath that day. If that ain't country I don't know what is. Those cool waters would wash away the dirt along with all your daily troubles.
The waters of our beautiful river have been used over the years for everything from baptisms to car washing. The power of the river has driven a sawmill for making cypress lumber and shingles that gave a new life to early immigrants. Washing away sins of the soul and a lot of daily work grime from sweaty bodies through decades was a blessing enjoyed by many.
After a hot summer day of hauling hay there was no better remedy than taking a dive into those inviting green waters. As I close my eyes and think back to those many times I can still feel the relief it gave to my itchy sunburned body.
There was a period in more recent times when Bandera was having water system problems and so there were days when I came in from working late in San Antonio that I had to go to the river and bathe. I would have preferred to have a badly needed hot shower after a day of pulling on pipe wrenches instead of a dip in those cool waters. I had not yet reached the point in my career where I was using a laptop computer instead of pipe wrenches in my daily routine so I did appreciate the river being a friend in my time of need.
As teen boys we could spend a late afternoon catching minnows down below the dam and then head upstream to still waters to catch some nighttime catfish for the frying pan. Those Medina River channel catfish tasted better than anything you can buy at the store or restaurant today. If you caught a big yellow catfish it took a little trick taught by some of the older Polish men to make it taste right. Polander fishing has taken on many new names in more recent times. It's even legal for certain times in some places these days.
Thinking about some of the all night fishing adventures we enjoyed on the banks of the Medina River around Bandera I can just smell the smoke of the cypress wood campfire and taste the morning coffee. Nothing competes with the taste of a cup of morning campfire coffee especially after a night of fishing and Lone Star induced story telling.
When it comes to this stage of Growing Up In Bandera with my great grandkids things are entirely different along the river. We can still splash around in the water and skip rocks until our arms give out but the feel is entirely different now. It's the freedom that is missing and it will never again be the same for me. Even with all that is provided for kids these days, it's a pity that they will never experience the fun life we had in earlier times.


GLENN CLARK         #348
The Bandera Prophet is grounded on the premise that relevant news delivery is ever-evolving. Founded by newspaper veterans, the Prophet delivers up-to-date information by writers and photographers who combined have 50-plus years of experience in the field and newsroom.
Completely free to readers, the Prophet is published on multiple platforms, and shared within the online community. No paywalls and no paid subscriptions required, the Prophet is built on the belief that information is so necessary to our community, that it should not depend on your income.
At the Prophet, news, sports, feature stories and more are immediately available with one click of a button or one swipe on a keypad.
All content copyright property of The Bandera Prophet