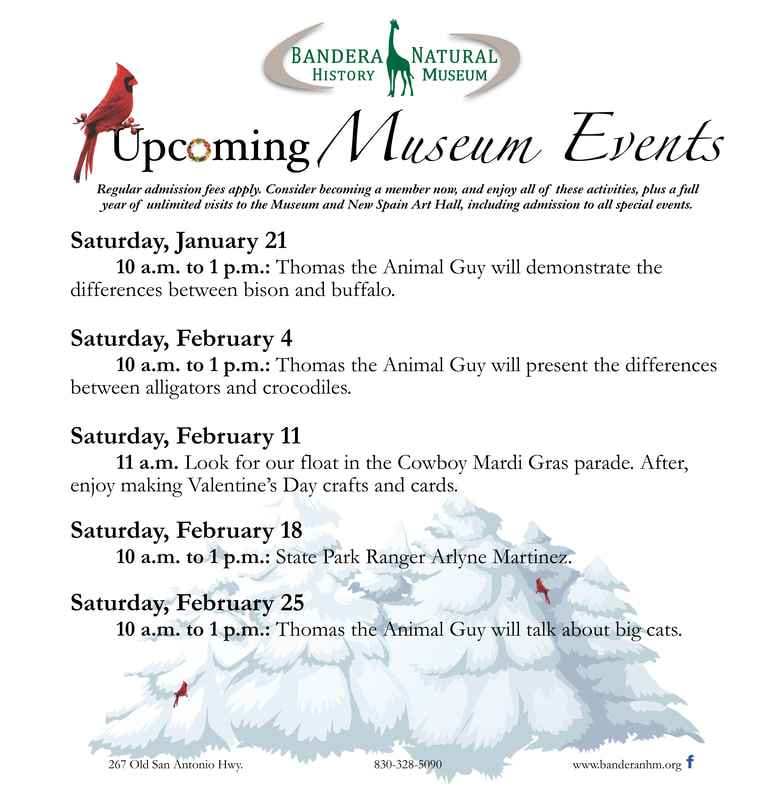 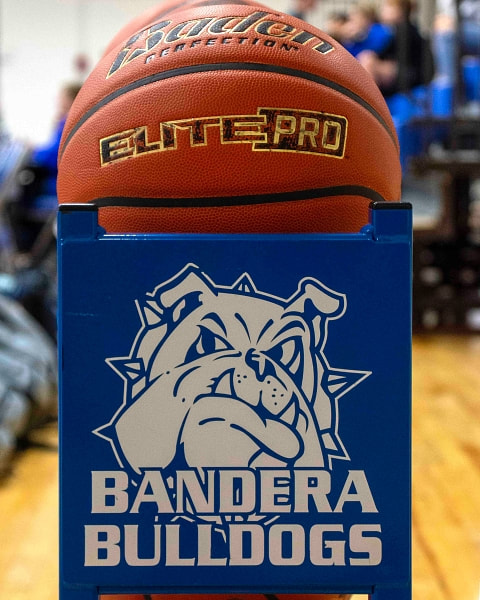 Varsity Bulldogs comeback from 16 down in OT thriller

After trailing 35-19 with 3:39 remaining in the third quarter of Friday night’s District 27-4A showdown against Davenport, the Bandera varsity boys basketball team put together a dramatic comeback effort and stormed all the way back to claim a thrilling 49-46 overtime win over the Wolves.
The Bulldogs struggled to get anything going offensively in the first half but played well enough defensively to stay within striking distance as Davenport led 13-5 after one quarter and 20-10 at halftime.
The Wolves started to pull away in the third, but Bandera settled in and s tarted to chip away one possession at a time after trailing by as many as 16 points. By the end of the quarter the deficit was back to 10 points, thanks to a scoring stretch that i ncluded five points from Bryson Holden and three points from Noah Barnett.
With the game back within reach, the Bulldogs traded baskets with Dave nport through the 90 seconds of the fourth quarter before a left-corner 3-point shot from Gavin Ortiz finally brought Bandera back within singled igits at 41-32 with 6:14 remaining.
Ortiz connected on a mid-range jumper to make it 41-34 with 4:56 to go, and Eli Salas got a steal and knocked down a clutch three pointer in transition to make it 41-37 Davenport with 3:23 left.
After another defensive stop, Ortiz knocked down another three from the left wing to bring Bandera within one at 41-40 with 2:45 remaining.
The Wolves snapped a scoreless drought of nearly four minutes with a layup at the 2:15 mark, but Barnett secured an offensive rebound and a put back to keep the game within one at 43-42 with 1:58 to go.
After exchanging defensive stops down the stretch, Bandera got a huge offensive rebound from Alex Dirck with less than 10 seconds to go and got fouled on the put back attempt. He converted 1-of-2 free throws to send the game to overtime.
Davenport scored first in the overtime period but Kayden Brown answer ed with a steal and layup. Dirck made the go-ahead layup off a pick-and- roll set, and the Bulldogs got the stops they needed in the final two minut es of overtime to secure the improbable 49-46 win.
Several players stepped up in key moments throughout the second half f or Bandera, including Dirck who finished with his second double-double of the season after posting 12 points and 12 rebounds. Ortiz had 11 points on 3-of-5 shooting from 3-point range, Noah Barnett had 11 points, five rebounds and five assists, Brown had six points, five rebounds, two steals and two assists, and Holden had five points and two rebounds. Salas chipped in three points, four assists, four deflections, four steals and three rebounds in the win. Cale Barnett contributed with one point.
I was so proud of our kids because they never quit. We were down 10 points at the half and our shots weren’t falling, but nobody hung their heads in the locker room. Even when it was a 16-point game in the third quarter, our leaders kept everyone focused on taking things one possession at a time. We had an awesome crowd bolstered by our middle school teams who came out for Middle School Night, and that made a huge difference in the fourth quarter and overtime.
That was a huge win for our program and was so just exciting to be a part of.
The win was the fourth straight for the Bulldogs in the gauntlet that is District 27-4A play. Bandera is now 16-11 on the season and 4-1 in district with a date set for Friday night at home against 20-5 (5-0) Boerne, who is unbeaten in district play and is ranked No. 5 in all of Class 4A.

JV
The Bandera JV boys basketball team struggled to protect the ball against Davenport’s tenacious full court pressure as the Wolves cruised to a 76- 37 win.
Bandera maintained pace early and trailed by just nine at the end of a high-scoring first quarter, but the Wolves thrived in transition and continued t o speed the game up through thesecond and third periods.
Layne Bourgeois scored 14 points to lead the Bulldogs effort as the team fell to 10-6 (2-3) on the season.

Bandera scoring: Bourgeois, 14, Randon Wheeler, 8, Jace Knowles, 7, Dylan Peace, 4, Blake Sauers 2, Julian De La Paz, 1
Freshmen
The freshmen Bulldogs gave a talented Davenport squad everything it could handle through four quarters Friday night but ultimately fell just short of a win in a 36-32 finish.
After trailing 24-17 at the end of the third quarter, Bandera leaned on Riley Moran down the stretch as Moran exploded for 10 of his 12 points in the final eight minutes. The Bulldogs had a chance to tie the game with less than 30 seconds to go but came up short as the Wolves were able to hang on for the victory. Moran and Bower led the way with 12 and 10 points respectively, while Gavin Garcia (5), Quinn King (3) and Evan Bowman (2) also got on the board.
The freshmen Bulldogs fell to 7-9 (2-3) with the loss.
The Bandera Prophet is grounded on the premise that relevant news delivery is ever-evolving. Founded by newspaper veterans, the Prophet delivers up-to-date information by writers and photographers who combined have 50-plus years of experience in the field and newsroom.
Completely free to readers, the Prophet is published on multiple platforms, and shared within the online community. No paywalls and no paid subscriptions required, the Prophet is built on the belief that information is so necessary to our community, that it should not depend on your income.
At the Prophet, news, sports, feature stories and more are immediately available with one click of a button or one swipe on a keypad.
All content copyright property of The Bandera Prophet